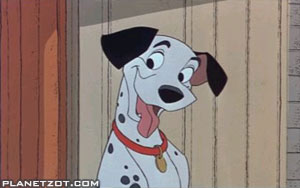 Pongo in a stoic but perky dalmatian who lives in a London flat with his human, a struggling musician named Roger Radcliffe. He finds the bachelor life extremely dull, and spends his days with his head on his paws looking out the window at the passersby. When he spies "the most beautiful creature on four legs", a lady dalmatian, and her human, a very pretty woman herself, Pongo tricks Roger into taking their walk in the park early, and Pongo locates the two ladies. The lady dalmatian is aloof at first, not wanting to fall for Pongo's showing off and attempts for her attention, just like her human, but they notice the guys regardless. Pongo causes some minor chaos which results in Roger and the woman falling into the pond. After an awkward moment, the two start laughing in spite of themselves, and Pongo, relieved that the situation has turned out well, turns to find the other dalmatian looking flirtingly at him. Before long, Roger and Anita are married, and Pongo and Perdita share the ceremony. At home with Roger, Anita and Nanny, Pongo and Perdita are thrilled when they learn they're expecting a litter of puppies. After a trying and stormy night, Perdita gives birth to fifteen puppies. One is nearly lost, but Roger and Pongo are able to revive it. The family's joy turns to terror when the fur-clad and black-and-white-haired Cruella De Vil, an old schoolmate of Anita's appears, offering any price to take the puppies away. Roger and Anita refuse, while Pongo glares at her menacingly, and Perdita retreats in fear to the puppies, and Cruella storms out of the house, threatening that they'll all be sorry. As the fifteen puppies grow, Pongo and Perdi start to lose their fears of De Vil's threat, but one night while they and their humans are on their nightly walk, Nanny is manhandled by Horace and Jasper, a couple of Cruella's hooligans, and the puppies are stolen. Pongo enlists the help of the Twilight Bark, a chain of communication with dogs all across the country, and eventually, their pups are located in Horace and Jasper's hideout, with Cruella's instructions to kill and skin them. With some help from the local barnyard military, the puppies, along with their dozens of other dalmatian puppies, are escorted (barely) out of Hell Hall. Pongo and Perdita reunite with their puppies, as well as the others, and offer to help them all return to London. When they return, barely eluding the insanely vicious Cruella and her goons, Roger and Anita (now well off because of a hit song he wrote, based on Cruella herself), sick with worry, are thrilled. They can't refuse all of the now 99 puppies, and Pongo and Perdi are now proud parents of a great many more little ones.

In the sequel, one of their puppies, Lucky, has an identity crisis and goes missing when he searches for his hero, a TV dog named Thunderbolt. Pongo and Perdita have to again go out on a quest to retrieve their missing son.

Pongo is voiced by Rod Taylor, by Samuel West in the sequel and by Kevin Schon in the TV series.

Pongo can be seen in his film, its sequel, and its late-90s TV series.

Though it takes a little effort, Pongo secures the heart of the sweet and demure Perdita, and their owners, Roger and Anita are married. Cruella De Vil is a seriously fabulous and fabulously wicked villain. Her only love is furs, and when her old schoolmate Anita's dalmatian has puppies, she must have them for their coats. She and her henchmen, Horace and Jasper, are definite villains for the dogs. My personal thoughts and analysis...

This is one of my favorites of the classic Disney films. The story is pretty basic, but the characters are great (the General, the Colonel, and Sergeant Tibbs are especially fun, with their military protocol, etc.), and Pongo and Perdi make a great Disney couple. Their relationship is surprisingly fleshed out and believable, considering they're canines and all. This film has one of the great Disney songs, and one of the great Disney villains, and also was (I believe) the first to employ the Xerox method in regards to animation, saving some trouble in the clean-up department. It's a touching, family-oriented film, and the puppies are classically adorable. 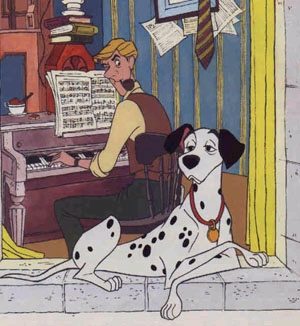 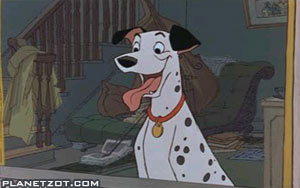 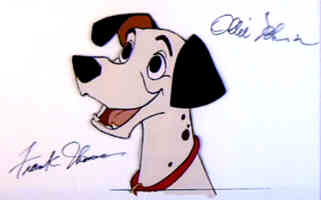 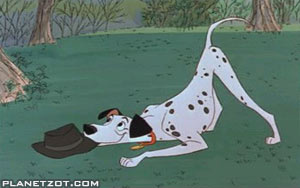 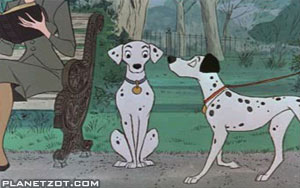 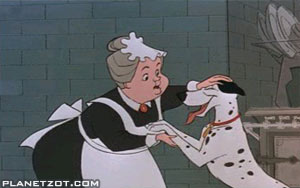 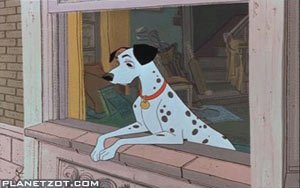 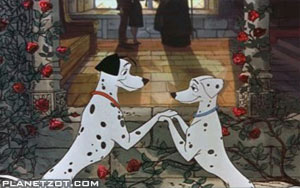 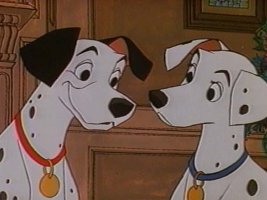 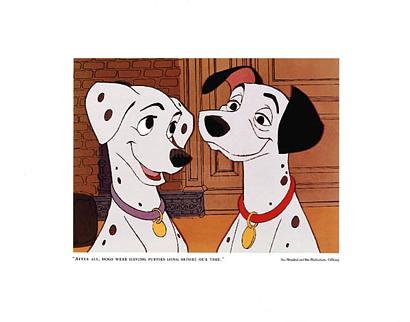 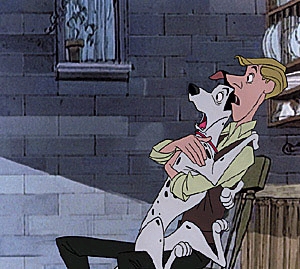 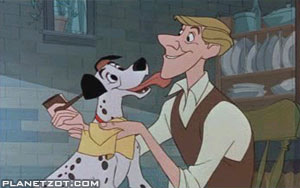 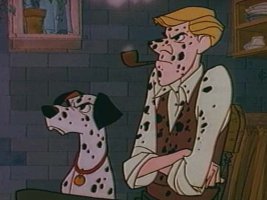 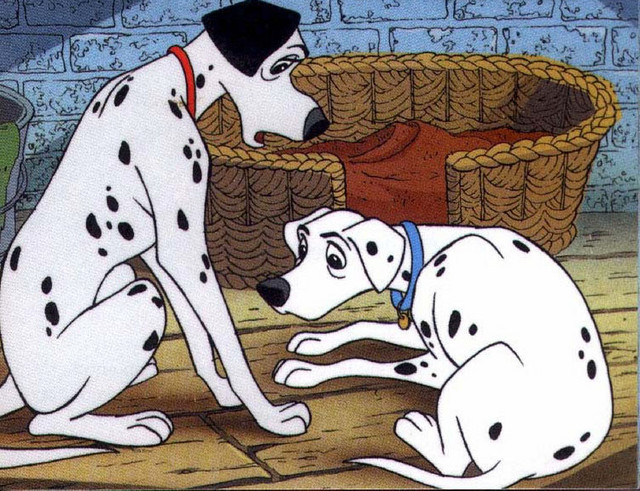 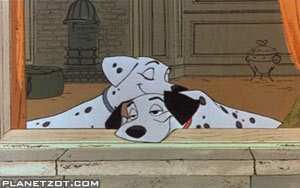 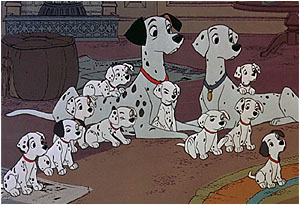 Pongo: My story begins in London, not so very long ago. Yet so much has happened since then, that it seems more like an eternity.

Pongo: As far as I could see, the old notion that a bachelor's life was so... glamorous and carefree was all nonsense. It was downright dull.

(Pongo sees Perdita for the very first time)
Pongo: Well, now that's a bit more like it! The most beautiful creature on four legs!

Pongo: Perdita, darling, are you all right?
Perdita: Oh, of course, dear. After all, dogs were having puppies long before our time.

Pongo: Everybody here? All fifteen?
Patch: Twice that many, Dad. Now there's 99 of us!

Pongo: That's the stuff! The blacker the better!

Vote for Pongo as your favorite hero here!